So, I’ve been thinking for a while about how to do this and I’m going to get straight to the point (but stick with me – it’s not all bad news!).

Firstly, it’s with real sadness that Gee and I would like to announce that the Wrong Football Podcast won’t be returning on a regular basis for the 2018 season. I know that will come as a surprise for both of our regular listeners (sorry, that’s an in joke) but while we’ve loved producing the pod and the opportunity for Gee and I to get together (well, virtually at least) and chew the fat offered up to us by the NFL on a weekly basis, regular life and ‘the day job’ getting in the way meant that it was becoming harder and harder for us to stick to a schedule and put together the quality content that we wanted to deliver.

Personally, I couldn’t be more proud of what we’ve done with the pod. When we think that we were both absolute novices when we started, I’d like to think that we got pretty good at it by the end and were giving listeners some real good insight, analysis and opinion on the game we love. Not to mention that it allowed us to speak with some real passionate NFL fans at Wembley and interview a Superbowl Champion (Shaun Gayle) and NFL journeyman (Nick Ferguson), which absolutely blew us away and we can’t thank Nick, Shaun or NFL UK enough for allowing us the chance to do that. 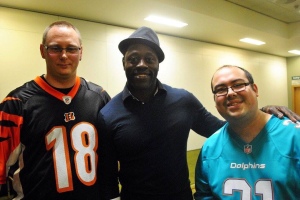 While I’m thanking people, I should probably thank our long suffering other halves. Jenny and Rachael have put up with a lot to give us time to put the pod together each week, so thank you both.

The aim of every podcaster is to make it sound easy – almost effortless. The reality is something a little different. Putting together the pod has always been much more than just the hour long recording session each week. There’s games to watch, news to study, analysis to be done, scripts to write – not to mention the editing process which can take about two or three times as long as the recording itself. No matter how much you love the sport, and nattering with your friends about it, this grind takes its toll after almost 3 years, and fitting it around the rest of life’s ‘goings on’ becomes more difficult, which has ultimately lead to us taking this decision at this stage.

And while it’s ‘adios’ to a regular podcast, I wouldn’t say by any means that it’s over. We’ll still put together some specials (although we’ve not quite decided on what format they’ll take yet) so keep those subscriptions active wherever you procure your podcasts to make sure you don’t miss any of these. And of course The Wrong Football blog itself is going nowhere! If anything it’ll ramp up as alongside Gee’s regular posts he has kindly agreed to let me vent my footballing spleen as a guest blogger throughout the season. This is something I’m really looking forward to and I hope I can put together something half as entertaining as Gee’s insights! Oh, and my Dad is intent on continuing to challenge us on our footballing knowledge with his now famous ‘extra point’ so we’ll find some way to incorporate that too!!

So for now, that’s all we’ve got time for on The Wrong Football Podcast. Thanks for listening, and we’ll see you again… soon!

I’ll let you insert your own ‘Gee Noise’ here!

Oh the injuries… so many injuries! This week on The Wrong Football pod, we take a look at the best of Week 6 – the week in which some of the leagues biggest names ended up on the sidelines – and also make our picks for Week 7, when the NFL returns to London for the first of two Twickenham games. We also talk about Ezekiel Elliott’s pending suspension, and pay tribute to Kevin Cadle, who sadly passed away on Monday. All that and more, this week on The Wrong Football podcast!

After our Bye week last week, The Wrong Football pod is back to talk all things NFL! As we head into Week 6, we take an updated look at the Kneeling controversy, and also Payton Manning’s famous number 18 Jersey being retired in Indianapolis. And how far ahead is Gee in the Pick’em competition? There’s only one way to find out!!
Oh, and as a little bonus this week, I’ve left a bit of an out-take at the end – enjoy!

As Gee very handily pointed out, we’re now an eighth of the way through the season already! This week, we’re looking at the coaching arrangements going on in Cincinnati, and how AP is settling in in New Orleans ahead of his game at Wembley in 2 weeks time. Also, we’ve watched the best of week 2’s action and are more than willing and able to fill you in on all of it! All that and more, this week on The Wrong Football Podcast!

While Dan might be refusing to acknowledge Week One thanks to the postponement of the Dolphins game with Tampa, the NFL 2017 season is about to kick off! This week, we look at some of the chopping and changing which took place around roster cut day, and also make our picks for Week One of the season – will Dan emerge victorious in the ESPN Pigskin Pick’em competition 2 years in a row? There’s only one way to find out! This week, on The Wrong Football Podcast

We’re back, and seemingly, we’ve forgotten how to read aloud… never mind the rust though, we’ve got this years NFL Draft covered! Not only that, but we’re taking a look at some of the movers and shakers from the earlier part of the off-season, and some of the bigger names who have decided to call time on their careers. How do we rate your team’s chances after the draft? Tune in and find out – this week on The Wrong Football Podcast!

With Championship week now just a memory, we’re left with just one game to go in the 2016 season. We take a look back at the AFC and NFC Championship games to see how the Falcons and the Patriots made it to the ‘Bowl. We also talk about the current state of the Quarterback and just where we see potential MVP Matt Ryan fitting in the grand scheme of things. And what will Antonio Brown be streaming on Facebook next?! All that and more this week on The Wrong Football Podcast!

As 8 teams turn to just 4, we look back at the week that was Divisional Week, and also ahead to the Championship games to make our picks of who we believe will make it to the Superbowl on 5th February. With so much movement on the Coaching Merry-Go-Round this week, it’d be rude for us not to take a look at who has landed there, and there’s also talk about a couple of teams looking to relocate – but is Las Vegas really a good place for a football team?! All that and more this week on The Wrong Football Podcast!

As the season draws to a close, it’s time to crown our Divisional Pick’em champion for the year, in what proved just how unpredictable this years league has been! We also take a look at the coaching merry-go-round that is Black Monday, as well as looking at Week 17’s action, and our picks for the first week of the Playoffs – The Wildcards! And as this is a pod for crowning champions, there’s only one way to find out if Gee or Dan finished the year top of the game prediction tree – All this week on The Wrong Football Podcast!

We’re back – did you miss us? We’ll pretend we didn’t hear that! As the regular season starts to near it’s home straight, Gee and Dan take a look back at all of the goings on of Week 14 in the NFL, as well as making their all important picks for Week 15. They also discuss the Heisman Trophy and it’s storied history of winners, the grind felt by anyone involved with the NFL at the minute (including us!!) and just what on earth is happening in LA?! All that and more this week, on The Wrong Football Podcast!