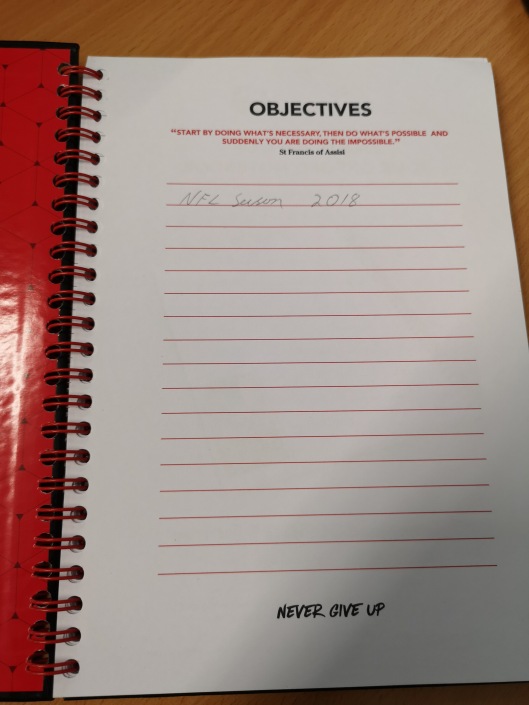 This year I am watching three teams through the playoffs, which nicely replicates what I think will be my regular season viewing without the additional game tape as it is not available in pre-season.

However, for the first full week of pre-season this actually only garnered me two full games to watch as the Chicago Bears played the Bengals in Cincinnati. I will start with my usual caveat that it is always dangerous to read too much into pre-season as coaches are not game planning for their opponents and are working on what they think their team needs sharpening rather than going all out to win the game. This resulted in a close game where I hope that the Bears level is on the up rather than the Bengals are slipping back from last season.

From the Bengals side, Andy Dalton looked sharp enough until he threw an interception when John Ross slipped and fell but it’s too early to know if the changes to the offensive line will work and that they won’t miss Brandon LaFell’s solid veteran presence in the receivers room. What I did notice was there was a lot of run plays called on first and second down in this game , which I hope is just the team trying to turn round a disappointing running game that finished 20th in the league last season by DVOA, although the passing game was actually ranked one place worse. They were hampered by the offensive line last year and there’s still a lot of chopping and changing going on there so frankly I won’t believe any improvements until they last through the first quarter of the season.

As usual Geno Atkins looked like a monster in the middle of the defence and I’m hoping the defence improves with the new coordinator Teryl Austin but the Bengals do look a little thin at corner past their top three. There were also some big run plays given up, but hopefully new middle linebacker Preston Brown combined with an improved defensive tackle rotation will shore things up in Vontaze Burfict’s absence (he’s suspended the first four games for a violation of the PED [performance enhancing drugs] policy) when the regular season hits. Certainly Jordan Evans caught my eye a couple of times in Burfict’s absence in this game.

I never claim to be an expert on special teams but the Bengals have been focussing a lot on speed in the last two off-seasons so hopefully that helps as I’m not sure if fans really know what to expect out of the tweaks to the kick off rules.

As for the Chicago Bears, it took a last ditch drive from third string Bengals’ quarterback Jeff Driskel to deny them their first win of the preseason 30-27. The offence certainly looked more like a current day scheme but opening up with a missed long pass by Mitchell Trubisky had to be an unwelcome reminder of last season. I’m looking forward to seeing more of Trubisky to see how he’s taking to the new scheme but he didn’t really catch my eye in this game. To be fair, as a Bengals fan my eye was drawn more to their side of the ball but the Bears did seem to repeatedly break long runs even if they didn’t do it consistently. I was a little confused by several players on the Bears roster who had the same number but were playing on offence and defence. I was impressed by Ryan Nall who apart from being one of two 35s apparently on the roster, managed to maintain an average run of 10 yards over nine carries, greatly helped by getting through the entire Bengals defence and only being stopped by a desperate last ditch tackle from behind. I actually thought that the Bears’ third string quarterback Tyler Bray (who came over from the Kansas City Chiefs this offseason) looked a little better than Chase Daniels but neither of them were wholly convincing, but they are backups.

The Bears defence did enough to cause the Bengals problems moving the ball, but apart from Kyle Fuller making the interception on the John Ross slip play I mentioned earlier no one particularly caught my eye. I definitely think this will change next week when I can focus in more on the one side of the ball as the Bears play so I hope to come back with more names next week.

So the other game I watched was the Cleveland Browns travelling to the New York Giants. I do wonder how much of defensive coordinator Gregg Williams’s reaction to Saquon Barkely’s thirty-nine yard carry that opened up the game for the New York Giants Hard Knocks will be able to show, but things were mostly positive for the Browns who ran out 20-10 winners. There was a really good catch made bu Jarvis Landry but possibly most hopeful for the Browns is that whilst Tyrod Taylor looked very solid in his limited outing, rookie Baker Mayfield looked to have active feet in a good way and played well. He only completed eleven of twenty passes but he threw for two hundred yards, two touchdowns and no interceptions. How sustainable this is and what Hue Jackson made of the running game I don’t know (but hope to find out) but this was a solid outing on offence.

As for defence, there was that long run and a couple of taunting penalties but it very much looks like the Battle for Ohio games with the Bengals could be competitive this season. If I have an excuse for the first game regarding spotting defensive players, this one proves that the team seemed to be doing the job rather than anyone jumping off the screen, but you miss so much on the TV copy that I definitely might have to pay an early coaching tape trip to the Browns

This post will be going up the day before Hard Knocks airs in the UK so the Americans are ahead of us and there is already a story out there that Hue Jackson punished rookie receiver Antonio Callaway by making him play over fifty snaps in this game after the fact that he was stopped by the police on the 5th of August became known. I’ll leave the details to actual new outlets but it’s a curious way to deal with a player and I’ll know more about how I feel about it once I’ve seen the show, but it definitely feels odd to me.

So on to next week, where we might get to see Bears first round pick Roquan Smith play linebacker now that his holdout has ended, more of the first team starters, and I’m sure more insight on the Cleveland Browns.