This is going to be a tough one, and I’m going to go off topic. Stick with me guys…

The football started early for me this week, with the Dolphins taking part in Thursday Night football in a fairly convincing win for the Texans. Brocktober is well and truly over, and his performance against the Bears a few weeks back feels like a hell of a long way away now! Hardly surprising when you look at how broken the Dolphins Offence is, and how powerful the Texans Defence can be. It’s never fun coming up against JJ Watt, but that’s especially true when you’re as banged up as Miami. And just like that, we’re at 4-4. Middle of the road. Standard Dolphins.

And that’s about all of the football I managed to watch this weekend, mainly because of something which happened on Saturday night which made it just all feel so… irrelevant.

If you’ve been following the Blog and Pod for some time, you’ll know that outside of the NFL, I’m a huge Leicester City fan (and you probably now know what way this post is going to go!). I’ve been a season ticket holder for the last 10 years and have seen some incredible highs, but Saturday night was one of the lowest and worst experience of my life as a football fan.

You won’t have escaped the news of the death of our owner and Chairman Vichai Srivaddhanaprabha, along with the two pilots and two other passengers.

Saturday started off OK – I went down to the King Power stadium and watched Leicester draw with West Ham. Not fantastic, but it’ll do. But then about half an hour after I got home from the game, I started hearing reports of an accident down at the ground. An accident which involved the Owner of our club’s Helicopter. And apparently, it was on fire outside the stadium after having lost control after takeoff, going into a spin and hitting the ground.

At first you think “well, that’s got to be over exaggerated” and you assume everyone managed to get out. But then we saw the footage, and it was truly heartbreaking. The helicopter had been a regular feature in and around the ground (I live very close so used to see it flying around fairly often) and it was well known that the owner and other dignitaries used it as a taxi after every game to take them back to London. The collective hearts of all Leicester City fans stopped at the sight of it on the news, as we had a good idea who would be on board.

As news started filtering through, it became clear that Vichai would be among the deceased, and I’ve been pretty distracted and emotional ever since. I took a walk down to the stadium on Sunday afternoon to pay my respects and was met with hundreds of fellow fans and an incredibly somber mood. But what struck me wasn’t just the sense of feeling around the place, but the vast spread of people who were there paying respect – not just Leicester City fans, but fans of Nottingham Forest, Derby, Leeds, Liverpool… it was clear that the whole of football had been shaken by this tragedy. And in fact, not even just fans of football – people who had no interest in football but had been touched by his incredible generosity outside of the game were there too.

That shouldn’t have surprised me when I think back to it. Vichai was one of the most incredibly generous people to have passed through Leicester. He and his family donated literally millions to Leicester’s hospitals (in particular through their Children’s charity), Universities and the city itself. During his time at the football club, he wrote off over £100million in debts as a personal gift to the club. He bought our stadium so we we are no longer paying rent to a developer. He spent millions and millions on the squad, signed off on a huge new training facility, and the fans and people of Leicester loved him for it.

Let’s not forget that it was under his stewardship that we did the unthinkable, overcoming all odds to win the Premier League. For those of you who aren’t football fans, that’s like the Jets winning the super bowl! (Sorry Ryan, I had to lighten this up somehow!). 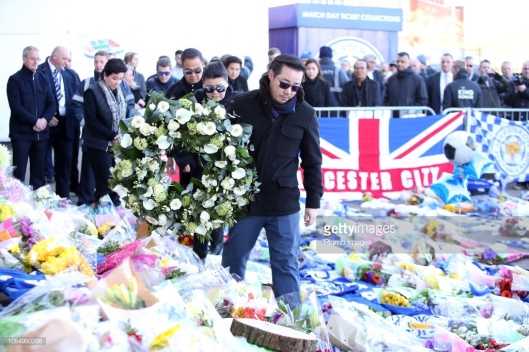 And it wasn’t just the big things – he was also responsible for buying every fan a beer on his birthday, Mince pies at Christmas, Bacon Sandwiches for breakfast and Scarves for people making long trips to Away games, and he even arranged for a bottle of Whiskey and glasses to be left in the Memorial Garden at the King Power stadium on match days for people to have a toast to their lost friends and family (something that I’d seen many times and always wondered who left it there).

It’s truly incredible when you think about it. How many other clubs owners have given so much to the fans and local community, and made such a connection? I don’t know how we got so lucky! I’m not sure Mike Ashley has given the Newcastle fans as much as a bad cold!

He and his son Aiyawatt (known to us fans as ‘Top’) were also amazingly ambitious. When they signed Kasper Schmeichel in 2011, they told him they wanted to be in the Champions League within 6 years, at a time when we were struggling to break out of the Championship’s mid table. When we first went up into the Premier League, they said to the press that they’d be in the Champions League within 3 years, and despite how ludicrous it sounded at the time, look what happened!

As you can hopefully see, I feel quite indebted to this man, and I’ve been gutted since Sunday evening when his passing was officially announced. But for the club, life will go on. Hopefully, when he feels ready, we’ll see Top take over as chairman and keep his father’s legacy alive. It’s a legacy that all of us as fans want to make sure is fulfilled and we owe it to him to do anything we can to make sure it does. There’s talk of a statue, or of the stadium being renamed, but whatever happens, Vichai and his contribution to our club and our city will live on forever.

Until next time (when I promise I’ll be more cheerful, or your money back!)