So, as happens from time to time, my carefully laid out writing time hit a real life speed bump, so instead of the piece I was expecting to finish today, I shall give you photographic proof of Dan and I interviewing real life NFL players for the podcast that will be dropping this evening, and our picks for the season’s opening game tonight. Football is here! 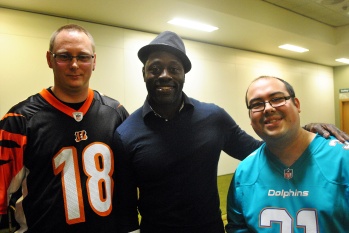 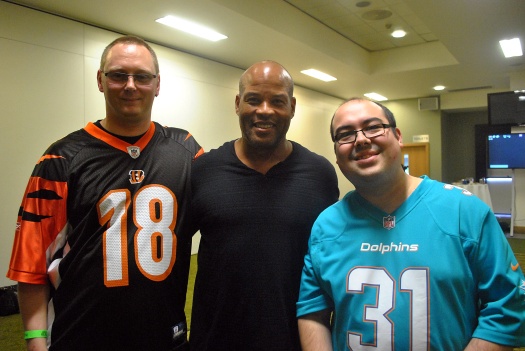 It’s been years since the season has started with a rerun of the Super Bowl difference, but there has still been a fair amount of turnover in the rosters and most importantly, Denver will be giving Trevor Siemian his first NFL start.

I think that the Broncos will have a competitive season thanks to a defence that still looks good despite the losses of several players, but it is doubtful they will be able to play as well as last year and so some regression should be expected on that side of the ball. Furthermore, whilst statistically Peyton Manning was a shell of his former self, Manning still had his football brain and in the playoffs having excepted his limited role was still eeking out what advantages he could through making sure the Broncos were in the right run play and managing the clock. All of this will be replaced by a green quarterback who will be looking in first instance to not lose the game, particularly as he doesn’t have the strongest arm in the world.

The Panthers will be trying to demonstrate that they have a counter to the plan the Broncos used last time, but given what a narrow path to success the Broncos had to follow, plus a Panther team that will want to prove a point even if it won’t be revenge for a Super Bowl loss, I think the Panthers will run out winners. The front seven of their defence remains formidable even if they will be starting a lot of rookies in the secondary, but with the league MVP Cam Newton getting new passing options, they should be strong on that site of the ball although there are still questions about their tackles, particularly facing a pass rush like the one possessed by the Broncos.

I’m not thrilled about the Broncos getting points, but I’ll pick this game for the Panthers, and I’m really looking forward to seeing in the start of the season.