The NFL offseason has swung into the next stage now the draft is well behind us and the OTAs or organised team activities are in full swing. In fact we’re not far away from the final break of the year for NFL teams before training camp starts and everyone is grinding until the end of the season. Under the current  collective bargaining agreement the current practices do not involve pads and even training camps these days are very different to the two or three practices a day structure that used to dominate the NFL offseason programmes.

The rigours of playing American Football are alien to many people here in the UK, even fans at times because it is such a fundamentally different game to the sports that are popular over here. No one on a football (or soccer as the Americans would call it) has such strict instructions on what they should be doing at every moment as each player has for every snap of an American Football game.  Yes there are formations and set plays in football but there is no play book filled with complicated instructions on where you have to be down to the yard as there are in American Football. It is also very different because American sport is largely built around situations, be it third and seven in American football, bottom of the ninth in baseball, or down two with 12 seconds left in the NBA. The stop start nature of these crucial moments is a different animal and of particular importance in American football, which is often referred to as a coach’s game.

However, the path for players to get to the NFL, like all the major American sports, is very different to how things work across the pond. We have school and university sports in the UK but nothing like the US high school teams or their college setup where for the big sports the student/athlete is for all intents and purposes a professional player being paid in access to education. We leave player scouting and development to the professional teams.

It is hard to get your head around a secondary school day scheduled around being up at five o’clock so you can get a lift in before school, or the spring and summer training young players put themselves through to prepare to play for their high school in front of a huge section of their local community. There were certainly no pep rallies for any of my sporting activities growing up and my name may have appeared in the local paper one or twice whilst playing for my local football team but never regarding what I did in school sports.

It was therefore eye opening to read Beyond the Gridiron: How to Successfully Transition into Collegiate Football by Travis B Key & Ashton Henderson. The authors took me on a journey through a different world where schools were changed just to improve the football experience and increase the chance of making it to college. The college walk on, who we often hear about in NFL media had to go through a gruelling day of practice having prepared on their own to fight for maybe one or two spots on the team. That’s just to get a chance to compete with the rest of the team to earn actual playing time. 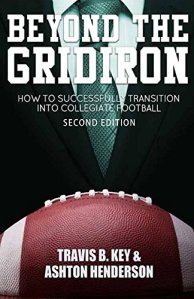 However, whilst I read this book trying to get an insight into how a work colleague made it to the NFL. The recent announcement by the NFL could make it a useful book for students in the UK with an interest in American Football. In conjunction with Barnet and Southgate College there is to be an NFL Acadmey in the UK which is being co-sponsopred by Nike and has player ambassadors of the likes of Osi Umenyiora, Jay Ajayi, Odell Beckham and Patrick Mahomes.

This is a new venture so there are no guarantees but with a potential pipeline for a player to get into an American college and maybe one day the NFL, it looks to definitely be another step in the development of American Football in this country. There are well established leagues in the UK but giving 16-18 years old the chance to dedicate more time to training can only help both their development and perhaps in time the general standard of play. The odds of any player making to college yet alone the NFL are small, but for the first time there could be a path without a family having to move to America for someone with the requisite physical ability and wish to develop it.

It is that development that is key. You can’t help but understand that reading Beyond the Girdiron, as it outlines all that goes into being a student athlete. How much time you have to dedicate to it, how much effort it will be to physically prepare, learn the playbook and not just your assignments but those around you as you have to know football. Additionally you have to make sure you study enough that you are academically eligible to play. The pipeline is well established in America, but as the NFL continues its efforts to expand into Europe there is another avenue that could be opening up. It will be a learning experience for all who participate but early success could be a real driver in establishing a path to the NFL from the UK and establish a model to expand into other countries.

I am sure we will hear more about this in the coming months. The trials take place over the next two Saturdays anyone who earns a spot could benefit from getting themselves a copy of Beyond the Gridiron to help them blaze a new trail by learning how those in America follow the existing path and carry out what is relevant over here.